I’ve seen a few ramblings about the Georgia Tech fight song over the last few weeks. I’m not really into sports. I know the fight song isn’t solely a sports thing but that’s what I tend to associate it with. I didn’t go to a game for nearly a year after i got to Tech, but when I did one thing I noticed was the fight song.

People will say it’s stupid. Maybe it is old and outdated but who cares? I care, and so should you.This is the Institutes main fight song. It represents who we are, and its tarnished by a blatantly sexist statement,

Oh, if I had a daughter, sir, I’d dress her in white and gold,
and put her on the campus to cheer the brave and bold

It’s small and it’s subtle, but it is what it is. Your daughter isn’t an engineer–that level of honor is left for your son. Your daughters just there to cheer him on.

It’s important to identify sexism to help eliminate it. It is subtle, but it’s there none the less. Allowing it stay only continues to sanitize people to the problem where they think a few small things don’t matter. But they do. They influence how we are perceived by others and ourselves.

I get it’s tradition, but tradition is a terrible excuse to continue doing something shitty. It was made in 1908, back before women were allowed in to Tech, so it shouldn’t be that surprising that it has sexist undertones.

Its demeaning to women. Keeping it the way it is not only reinforces this type of mindset by encourages it. We need to stand up and say this is unacceptable. Luckily, things may be changing.

Georgia Tech sent a message to it’s students earlier today talking about just that. It read as follows,

It has come to the attention of the Student Government Association that a proposed change to the Institute’s main fight song, I’m A Ramblin Wreck from Georgia Tech, has stirred up many conversations and discussion over the possibility of a change and a possible underlying issue that spurred the proposal for change. This change was not introduced by a member of the student body however such changes, should they happen, have to be done at the request of the students. The link below is to a poll to gauge the opinion of the student body as to how we should move forward.

So things may actually change all depending on this one poll. Here’s a snapshot of the poll. 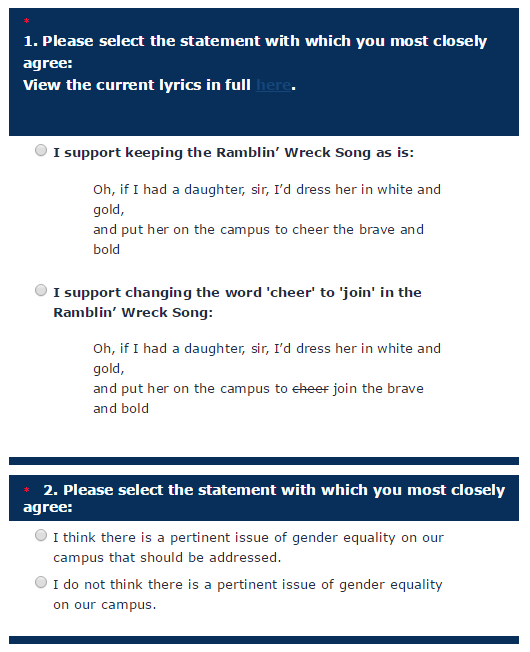 This is great–well, not really. It’s definitely a step in the right direction, but I don’t think it should be left in the hands of the students. Universities don’t let fraternities, sororities, or other groups have free rein. Racism and sexism is serious problem that the the University rightly won’t tolerate. I’d expect the university to be even stricter when comes to something like this that doesn’t just represent one group but rather the entire student body and the university itself. Of course they don’t, and it’s appalling in my opinion.

But it is the way it is. We have to work with the hand we’re dealt. That’s why I urge you to go and vote in the poll. Vote to fix this embarrassing problem.