“The Earth is a very small stage in a vast cosmic arena.” – Carl Sagan. There are billions and billions of other worlds that we could study. The most recent estimate puts the universe at ~2000 Billion Galaxies with each galaxy having ~200 Billion stars with each star probably having at least one or two worlds. There is so much to be learned, and while it may not seem important to our everyday lives, each of these worlds can help us better understand Earth, ourselves, and our place in the cosmos. That is why I, and so many others, study planetary science.

My focus is on Titan, Saturn’s largest moon with a diameter only slightly larger than the width of the United States. It has a thick atmosphere made of nitrogen and methane. Beneath it lies a thick water ice crust. 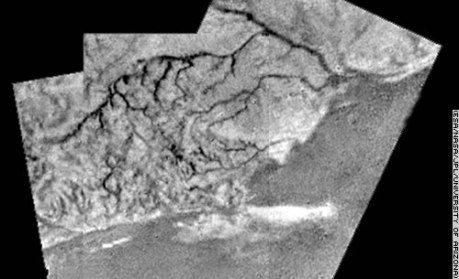 On it we find lakes of liquid methane that cycle through the atmosphere creating a complex system of exogenic processes, like the fluvial erosion that creates the drainage channels seen here.

They work to alter the morphology of the surface. Researchers have demonstrated that these play a prominent role in the resurfacing of Titan. However, there are other processes to consider.

Imagine a glacier, stationary to the naked eye, but creeps slowly over longer periods of time. This doesn’t happen on Earth because the rocky crust is too strong, but even on Titan, the surface temperature is so low that its only happening on the order of 10s to 1000s of millions of years. So its understandable why scientists may assume it has a negligible effect. But it isn’t enough to assume; it has to be demonstrated quantitatively. That is what I am going to do.

I’ll do this numerically, using a finite element model, like the one used by Melosh and Raefsky to model the deformation of a slab under subduction. We’ll create a mesh like the one seen here, but modeled for a crater topography, like what is seen here from Thomas and Squyres 1988. Each point or node in the mesh allows us to track the changes of the topography on a finite scale.

We have a good understanding on the process of viscous relaxation. Other worlds like Gaynemde, Callisto and Europa work as test cases for how craters relax without an atmosphere to degrade the surface more quickly as seen on Titan’s craters.

It’s important model this process for Titan to ensure that viscous relaxation is accounted for when modeling Exogenic processes. This will better constrain the thermal, mechanical, and compositional properties of Titan’s surface and interior. Thus improving our understanding of Titan’s volatile history that is known to have changed significantly in the last eon alone (e.g. Nixon et al., 2012; Neish et al., 2014)