It’s been a while since my last post. I’ve gone on the impact cratering trip to Sudbury Ontario. 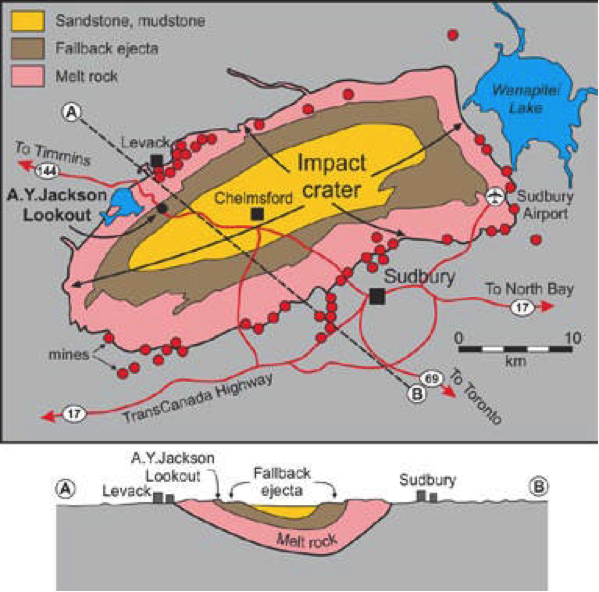 As one of the oldest and largest impact craters in the world, it has a lot to tell. Of course, with its age comes complexity, but the level of detail that has been retained is fascinating. The basic idea is since forming, the crater has undergone multiple geologic events that have stretched and squeezed the crater into its weird elliptical shape. We can tell it is a crater using geologic mapping to create the types of figures you see here and also look for things that happen under huge amounts of sudden pressure (like melt or shock related features, think like cracks in a glass when it with a heavy object.

The groups have submitted their group reports of our trip, and now we are tasked with doing a personalized research project due at the end of the semester. I’ve begun researching fracturing and deformation in craters (Kumar and Kring 2008); I’d like to try modeling impacts on icy bodies compared to previous models of rocky bodies (Collins et al. 2004). I’m still working on how viable this is in the course of the project, but I think worst case its a scaled down comparison from a full on model. The one I’m hoping I can use was used by Collins et al. 2004 and first implemented by Ivanov et al. 1997. More to come as I progress.

Another exciting event was getting to attend the TSM at MIT is Boston. It was my first time in Boston, and I was very excited to get to visit both MIT and Harvard. It was a really interesting meeting. In addition to a long list of interesting talks, we concluded the meeting with a day long trip to Cape Code. It was both fascinating and a great way to get to know the other scientists in my field. More photos to come on Facebook eventually.

The real obstacle I had to overcome with this was constructing a mosaic that was complete and of reasonable resolution. I had been facing several issues up to this point, issues that had started a year ago. When Catherine first asked Alyssa and I to construct mosaics, I learned a few things about ISIS and the command terminal. However, there were several things I just couldn’t get it to do. 1) A lot of the files I found didn’t want to mosaic together even though they were the same resolution. I don’t know exactly what the issue was, but I suspect it had something to do with subtle differences in the resolution (because they were supposed to be the same resolution from the get-go. At the time I figured the few that wouldn’t work were somehow flawed, so I decided to ignore those for the time being. 2) When I tried to project different resolution images to the same resolution they wouldn’t change. I couldn’t figure it out. When I finally came back to it to start work on my crater mapping, I ended up just projecting each image and importing them all into GIS. Which meant I had a project using 100 4GB images. You can imagine the issues with that. 3) I didn’t have projections for the north and south poles. I thought for sure there were craters I was missing because of it. It didn’t occur to me that I just had to change the projection type. Now I think I have a better understanding of what that means and the parameters that go into defining these projections.

When Catherine asked Alyssa and I for a 32ppd mosaic, I panicked because 1) I didn’t think I had a complete data set and 2) I didn’t know how to create this one-file mosaic. That was when I decided to try and tackle it again, by doing what Catherine suggests, recreating the script using the GUIs that each function had. You manually plug in what you want and it can either run it or create a script for you. Basically, I already had a script Catherine helped me make. I was just trying to adjust it up to this point rather than starting over. I did it for the maptemplate. I assigned a resolution to project to, but it didn’t work. So I thought to do it with the map2map function that used the maptemplate. It too asked for a resolution. Once that was done, it effectively changed the resolution.

After that it became a matter of implementation. With a bit of fiddling and a small improvement in my command template abilities, I was able to improve the script(s) I used to make mosaics in a more effective and hopefully easy to use way. I won’t get into to the nitty-gritty, but I’ve effectively reached that point in coding where you really understand what each component is doing and are capable of optimizing the process. So I consider this a major success.

Of course, there are still a couple issues, mostly to do with the latest radar images yet to be released publicly, but I’ve got plenty of work I can do with this mosaic (and the beautiful polar mosaics) I have made.

A few things could still be done. It wouldn’t hurt to do a detail check of all the images I have to make extra sure I am not missing any. I could also go through each and every image that overlaps(very time consuming) and say, okay, this one is slightly better than this one, lets make sure this one is on top of the other. This isn’t urgent and may never be done, but for perfection, that is the next step.