I have completed an initial map of Titan’s Globe, and its two Poles. I think that was the last thing we talked about. I’ve since gone through to quadruple check that I had all the images. According to my research (definitely click here), I have all the images that are publicly available.  There is one last flyby that has not been released. I have it but it isn’t correlated, which is to say calibrated to the other images such that it won’t mosaic properly. It’ll be released publicly eventually, or I may process it myself. However, it isn’t a big priority at the moment. 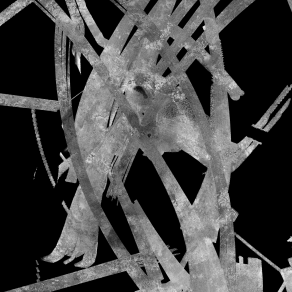 Using these beautiful works of art, I’ve finished the first round of crater mapping. I’m going to talk about them and how I’m analyzing them. However, I am not including the polar maps just yet. I’m working in MATLAB with the shapefiles I made in ArcGIS. That means I’m converting the spatial values in the shapefiles, which for some reason do not match up with the original projection of the imported image coordinates.

Allow me to elaborate. The first problem is Arc does not like Titan images. Even when I set the map to degrees, the center is off, and the image goes from like 90 to 180 in the middle to -180 on the other side of the middle to -90 on the other side. I may be off on that, but the general idea is that its off which makes it a hassle to locate images. Although, it isn’t much related to the actual shape files (or the image layers) because the “meters” values are way too high to be accurate for Titan, and they don’t convert to realistic degree values. The point is, it seem far more realistic to convert them to degrees using the arbitrary boundaries that seem to exist for the map. I find the upper, lower, left and right boundary values for the full extent of the entire project, then I can change that to a range from 0 to 180 along latitude and to a range from 0 to 360 along longitude. The net result took some work because obviously I made a few mistakes, but the end result looks as you would expect. The values are also consistent, for the couple I checked, with what ArcGIS says (within its warped axis labels if that makes sense).

You may think you’ve seen this before in my presentation for the Titan Surface Meeting. However, this is different. In that one, I plotted the craters and then changed the axis tick names. Now I have specific spatial values applied to each part of the craters.

There are some issues. First being that it wasn’t as straightforward for the polar maps. I decided to focus on the globe first for this discussion. However, I’m having a hard time grasping the spatial values of the polar maps. I have the same upper, lower, right and left values for the shape file. However, these don’t lie within the boundaries of the image layers as the global map did. That is one problem.

The other issue is we have maps that should span between +/-90 to +-45 in latitudes and the entire 0 to 360 in longitude. I made the mistake of assuming its as simple as up/ down and left right for lat and long in these square images. I recognize it’s not that simple. I’m confident I can figure it out with time, but I chose to handle that later. If you have any quick comments or suggestions, it would be appreciated as well.

I have ideas on how to handle the issue with the spatial values of the shape file not matching up with the image layers, but it complicates things. I need it to match up because the shape file extent is only as far as the craters go. The image files extend to the boundaries. I use the boundaries to create the conversion. If I can’t get it to match up, I’ll have to create some shape along the extents of the image files.

Lets talk crater data. Given my new catalog of craters, I was able to find the diameter of these craters (along lat/long). I used the Haversine Formula to convert changes in lat and long to kilometers. This seems logical. I mean I did everything right. Used the right values for the degrees. I used Titan’s radius. Except, the equation isn’t perfect. The shape files give us min/max values for lat and long, so I can do the calculation for a change in latitude or a change in longitude. Naturally, I did it for both.

The points match up rather well. Clearly, they start to disagree for higher latitudes. In the table above, I give averaged values. However, is this the right decision? Am I overcomplicating this by doing it MATLAB instead of learning how to do it in Arc? I hope the answer is no to that last part because I’ve pretty much got this process down. Any changes to the global map can easily be processed with this code. Soon, the poles will too. Then, we throw in the topography data, and hot damn we got ourselves a new crater population.

For now, I’ve created a GIF for every crater registered. I’m going to list them here (or as many as it will let me) in descending order by diameter. I used the average values for the diameters. Let me be clear, there are a few that need to be looked at again. There are others that in retrospect should not have been plotted. Then there are a few that make no sense whatsoever. It possible some of these are indicative of a problem in my processing, but with most of them matching up so well, I don’t think thats the issue.