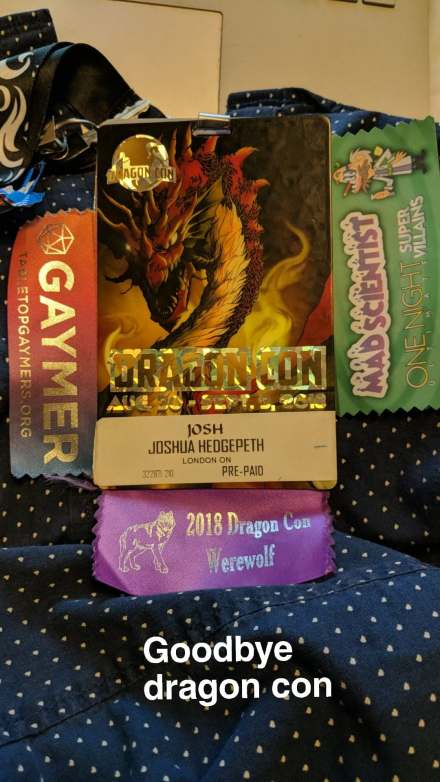 So, I spent the weekend visiting friends at Dragon Con in Atlanta. It was a blast, and this year I made sure to get at least 5 hours of sleep each night. Unfortunately, that meant I kept missing early panels I wanted to go see. I ended up spending most of my time playing games with my friends that I don’t see very often. Although, I did manage to attend two panels. One was hosted by Cecil Baldwin, of the Welcome to Nightvale Podcast. It was on queer representation in Horror films. There are a few new horror films I want to watch now, and even more that I want to rewatch with a new point of view. The other panel was on the mature themes in a Handmaids Tale. I still haven’t finished season 2, but I still enjoyed it. The panel asked some interesting questions like what constitutes rape in this world. Even consensual sex between June and Nick is arguable a form of rape because that wouldn’t be happening if she wasn’t in this position. It essentially her best attempt to assert some control over her own life. Then there was a question over the justification for violence, and if it is justified, then when is that threshold where it becomes okay?
All in all, I regret not seeing more. I didn’t make it to a single Space, Science, or Skeptic panel. To be clear, I wanted to, but in the moment, it is easy to get invested in gaming for hours on end. Then its a question of navigating from Hotel A to Hotel B which makes some panels more difficult than others. There is just simply too much to see and do.

The gaming was mostly Ultimate Werewolf. Although as a group, we tend to play all sorts of deception games including secret Hitler, Two Rooms and Boom, etc. It is a great way to have fun and get to know new people.

The trip wasn’t perfect. It’s long and stressful (but I don’t regret it). Still, my car stopped working on my way home and I had to spend the day in Michigan at a mechanic. It was over 90F (32C) and it was terrible. Luckily, they got it going, but I think it may be time for me to begin making arrangements to say goodbye.

Now, lets get to business. My current agenda has me finishing the Titan Craters paper by updating the Stereo results. That is my number one priority at the moment. From there, I need to move on to my new project(s). With that in mind, I have a few ideas to discuss further with Catherine. We’ve already spoken about studying how molecules will freeze in an impact melt pond. I’m also interested in testing the stability of a melt pond in an impact crater. If we have a porous subsurface, water will drain out, but how fast? The slower it is, the more time the pores have to fill with frozen water. My idea is that we may be able to model at what porosities a pond may remain. A shrinking pond also introduces the possibility (if flimsy) of wet-“cold-dry” cycles. This is a stretch, but McMaster University showed us how they are simulating wet-dry cycles with their planetary simulator to encourage polymerization. It likely will not happen at these cold temperatures, but I am curious how these molecules may act when frozen in a rigid ice matrix. Furthermore, if we consider a pond that is draining yet simultaneously freezing, we might imagine a hanging roof of frozen ice that may break and remix partially. Again, its a stretch, but I spent a week hearing about this wet-dry cycle and tried my best to think how if at all it could happen on Titan. Even if we disregard this cycling, the question of melt pond dynamics in a porous environment is still interesting.  I need to talk to Britney and her group, but I think Jacob, who is working on ice-water interactions in Antarctica and Europa because I think this type of project is still similar.

Other courses of action are, investigating Impact craters in RADAR. I assume that would involve RADAR processing (roughness, CPR, etc.) then mapping and inferring and possible ground truth planning. One other project which we spoke about (but one I am not all that excited about) is mapping fractures to river orientations. That is something I still need to discuss with Oz to get feedback about the report I made.

I also remind you all that I will be gone from October 6th to 14th (I think) for the Meteor crater course. I will also be gone for a cruise during Halloween (very sad about that).

One Reply to “Starting Off Right: My Trip to Dragon Con and Work Ahead”