Earth as an example (the only)

Let’s think about how life might have arisen on Earth, and how it is evolved since then. Life requires a few crucial pieces: energy, resources, and a solvent to react in. Lets fast forward a bit and think about this resources in the form of organic molecules, something more complex and closer to the molecules of life. Then how easily can it go from complex organics, to the stuff of life?

It was Darwin who said, “But if (and Oh! what a big if!) we could conceive in some warm little pond, with all sorts of ammonia and phosphoric salts, light, heat, electricity, etc., present, that a protein compound was chemically formed ready to undergo still more complex changes, at the present day such matter would be instantly devoured or absorbed, which would not have been the case before living creatures were formed.”

He had two main points, the first being life needs an environment conducive to the synthesis of complex chemistry and capable of sustaining life. That would then need to be stable long enough to allow life to arise and thrive. On top of that, were (or if) life arises today, it would be so quickly consumed by some other form of life already existing. Compare that to the time before life, where even the most primitive of life would have access to nutrients unchallenged by other life. It was likely flourish. With this in mind, lets think about Earth, its history, the nature of its environment, and the evolution of life.

The geologic history of Earth 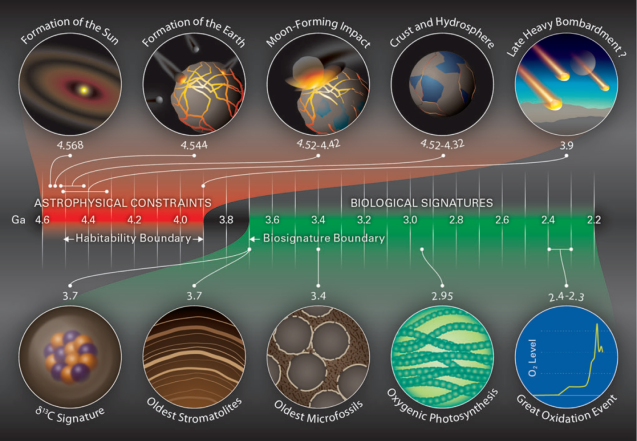 We find the last universal common ancestor of cellular life to have predated the end of late heavy bombardment (>3.9 billion years ago (Ga)). – Betts et al. (2018)

These are likely more controversial than one of the more accepted lines of evidence (Schopf et al. 2017; 1993). This leaves us with a possible rise of life over ~0.1-1.5 billion years. Let’s be conservative and say ~1-1.5 billion years if we raise our threshold of evidence. That would suggest a solid billion years is needed before life can arise. That doesn’t bode well for an easy origin of life. Of course, there are other factors we can use to control this.

Let’s think about the earliest stages of the earths formation. The earliest oceans were likely sourced by accretion material from asteroids. We know this by looking at the isotope of Hydrogen, where hydrogen has a neutron. Essentially, the ratio of H to D (deuterium) on earth compare to comets don’t match (but those from meteorites do). When then did the earliest oceans form? There is evidence of oceans in the early Hadean, but if it was very early, it was certainly vaporized by the moon forming event. The water would quickly cool and condense by 4.4 Ga, and eventually cool to a temperature habitable to life by ~4.3 Ga. This reduces the time for life to arise to ~300 million years.

Around 4 Ga, giant impacts occurred from left over asteroidal material. Evidence of this on earth is erased, but we can observe it on the moon, Mars, etc. This is a time where the impact rates were much higher than today. Some suggest this may have been caused by a number of icy bodies out to Jupiter and beyond that became unstable. The take away here is that the LHB likely had significant effects on the environment. At the site of impact, any life would be extinguished, but even further out rocks would be damaged and heated. Dust could block light and change the climate. Aresolos from eruptions would change the composition of the atmosphere. Therefore, this was a very chaotic and  unstable time in Earth’s history. We have to take this into account when asking ourselves, how quickly did life arise?

Even after the LHB, things didn’t necessarily become easy. Impact still occur, and tectonic recycling erases evidence of the past. It makes identifying life further in the past all the more difficult to identify life with high levels of confidence.

If we allow ourselves to accept some of the earliest estimations of life, we can see life arose very quickly. Nevertheless, catastrophic events would have disrupted this. Any habitable environment would have been made unstable. Thus, it would not be very conducive to life. If we restrict ourselves to more conservative estimates of the earliest forms of life, we see a time line of ~300-800 million years over which life seems to have arisen. Take into to account the LHB, and things become even more muffled. Did life take 300 -800Ma years, or was it just that the environment was not sufficiently stable to allow for life. Lastly, are we just limited by the evidence that remains? Ultimately, we cannot know for sure if the origin of life is inevitable. However, geologically speaking, even somewhat conservative estimates put life at arising fairly quickly (300 Ma), and I think it bodes well for the more optimistic conclusion.

I recommend checking out a more formal overview of this timeline in Pearce et al. 2018.

2 Replies to “Was the origin of life inevitable?”

There was an error retrieving images from Instagram. An attempt will be remade in a few minutes.